This year, we introduced a new product, opened new offices, continued our impressive pace of growth, and received recognition from industry, educators, and customers around the world!  Looking back, we’ve compiled what we think were our top ten moments of 2018.

Motion Metrics made a big announcement at our annual general meeting in August – this fiscal year, we grew revenue by 39%.

Since 2013, Motion Metrics has seen its revenue more than double.  Over the last five years, Motion Metrics expanded its Vancouver-based team from 30 to 60+ while establishing regional offices in Chile, South Africa, and Australia.

Thanks to the hard work of LatAm SpA, we are proud to have Codelco, the largest copper producing company in the world, as one of our loyal customers.  This year, the state-owned Chilean mining giant praised the benefits of using our ShovelMetrics™ Missing Tooth Detection solution at their Gabriela Mistral (Gaby) and Andina sites to prevent high-risk crusher obstructions.

4.  Co-authored a LoaderMetrics™ study with a Chilean copper mine

Like many hard-rock mines, the copper mines of Chile experience significant production loss from broken shovel teeth that end up in crushers.  To address the issue, the mine installed LoaderMetrics™ Missing Tooth Detection.  Over a period of 10 months, our solution helped the mine avoid a production loss of ~144 hours.

This year, we sold a record number of ShovelMetrics™ systems for backhoe-style excavators to operations worldwide.  To learn more about ShovelMetrics™ for any shovel, excavator, or backhoe, visit our product page.

ShovelMetrics™ at work in the cab of a backhoe.

Headquartered in Santiago, Chile, Motion Metrics LatAm hired several new employees and outgrew their existing office.  Hence, we moved to our new location in Nueva Santa Maria.  Our African team also expanded this year.  We have always had a dedicated team to support our African clients, but typically this team works directly on mine sites throughout Botswana and South Africa.  This year, we established Motion Metrics Africa Pty.

Our LatAm team moved in a well-appointed new office in September.  Stop by for a tour!

As a technology company, our continued success depends upon responsive innovation, rapid product deployment, and flexible resource allocation.  We realized that making improvements to existing solutions and developing new solutions have very different work flows and resource allocations, so this year we established a new agile stage-gate team tasked with swiftly identifying and bringing to market new artificial intelligence-based solutions.

10.  Our CEO received the prestigious Dean’s Medal of Distinction 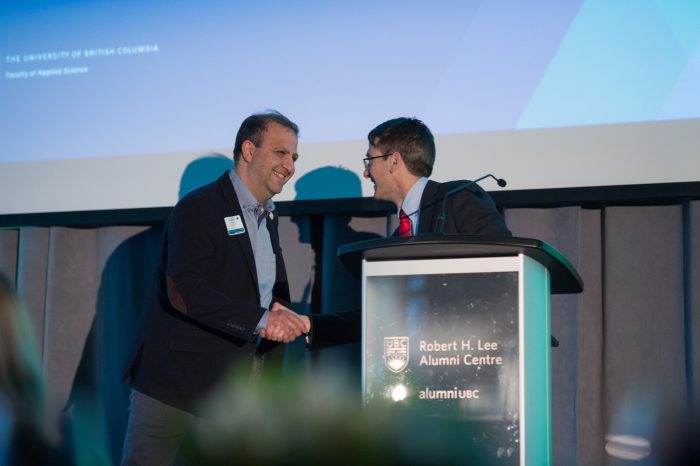 Our CEO Dr. Shahram Tafazoli was honoured to receive the UBC Faculty of Applied Science Dean’s Medal of Distinction.